Dead or Alive II from NetEnt: Slot Review - the meanest slot in the West!

Return to the Wild Wild West once more in this superb follow-up to the classic NetEnt slot Dead or Alive.
casino game review dead or alive dead or alive ii netent slots

Travel back in time to the Wild Wild West to protect a town from a bunch of outlaws once more in this hotly anticipated sequel to the classic NetEnt slot Dead or Alive! The original Dead or Alive game was released way back in 2009 and to this day still remains not only a cult classic but is also one of the most played slots of all time. To celebrate a decade of this game being around, NetEnt decided to mark the occasion by finally giving players what they were asking for by releasing a follow-up to the smash-hit slot. Read on to find out if Dead or Alive II has what it takes to outshine its predecessor?

Dead or Alive II is a 9 payline slot that comes with Sticky Wilds, Scatter Wins, and 3 Free Spins bonus games. 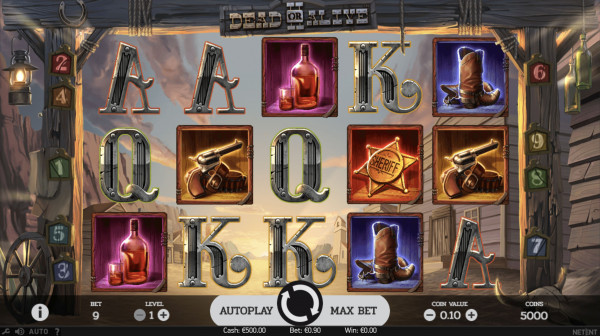 Dead or Alive II much like the first game features a range of Western-themed symbols including cowboy boots, hats, guns, whiskey bottles, and sheriff badges. Speaking of the sheriff badge, keep a very close eye on this symbol as if you happen to land 5 of these symbols on an active payline then you’ll be leaving the Wild Wild West smiling with a fine payout worth 100X your wager!

Just like the original Dead or Alive, this slot also features 5 different Wild symbols which are each represented by a different outlaw. The Apache Wild symbol appears on reel 1, the Della Rose Wild on reel 2, the Jesse James Wild on reel 3, the Belle Star Wild on reel 4, with the Billy the Kid Wild appearing on you guessed it reel 5. These symbols substitute for all other symbols apart from the Scatter to help create the best possible winning combinations on the reels.

The Scatter symbol in Dead or Alive II is illustrated by an image of a bull skull with 2 guns. It is the highest paying symbol in the game as if you are lucky enough to land 5 Scatters on the same spin then you will receive an incredible 2,500X your original bet! This symbol is also used trigger the special Free Spins feature which can be accessed by landing 3 or more Scatters anywhere on the reels. Once triggered, you will then be awarded 12 Free Spins as well as the chance to choose from 3 different Free Spins games. Each Free Spins feature comes with its own unique volatility level so you can choose how volatile you want to play. The Free Spins games are as follows:

NetEnt have really outdone themselves when it comes to visuals in this game as it features highly detailed graphics and stunning animations. It is streets ahead of the original which to be fair is not too hard as it was released over 10 years ago and is really looking its age these days. Dead or Alive II takes place in front of an old western town with swaying lanterns and bottles on opposite sides of the reels along with a clear blue sky breaking in the distance. Symbols are superbly designed and full of intricate details and colours and consist of Sheriff Badges, Cowboy Hats and Boots, Bottles, Guns, along with a bunch of classic A – 10 icons. The animations are fantastic as symbols zip down the reels and burst into life dramatically when part of a winning combination. A special mention for the 3 Free Spins games as each one takes place in a different setting. For example, the Train Heist Free Spins game is set inside an actual train carriage!

The music is atmospheric and dramatic as it features slow guitar strums and deft piano sound effects with the occasional click of a gun reloading in the background. It complements the action-packed gameplay perfectly.

Below is a summary taken from the PayOut Table from the game. The amount won for each combination depends on the value of the bet when you spin the reels.


Our Verdict on Dead or Alive II

This slot is made by software giants NetEnt and we are happy to say that for once it’s a sequel that’s way better than the original. Dead or Alive II features outstanding graphics and animations, a superb soundtrack, as well as a wonderful range of bonus features to keep you spinning in the Wild Wild West for hours on end. Much like the original, it features the very same RTP and payline structure and it is nice to see it also brings back the Old Saloon Free Spins feature here too. It’s great that you get to choose from 3 different Free Spins games with each one having a different variance level. The most rewarding feature by far in this slot is the High Noon Saloon Free Spins feature as you can combine multipliers to devastating effect here to win massive multiplier prizes that can reach a maximum payout worth an astonishing 111,111X your wager! The only downside is that this feature is extremely volatile and can eat into your bankroll pretty quickly so make sure to have plenty on hand before playing this game.

Saddle up and be quick on the draw to win massive cash prizes in Dead or Alive II!